Excavating and grading are among the two most important processes in any site work. As excavation contractors in Guelph, we can handle any type of dirt work. Our years of combined experience along with state-of-the-art machinery enable us to offer a professional and quality service. Our contractors can transform a raw property into a beautiful landscape. At M.D.S. Projects Ltd, our biggest mission is to help your dream property design come to life.

What’s the difference between excavating and grading?

Although some people use the terms excavating and grading interchangeably, we use these two techniques for very different purposes. Our excavation contractors in Guelph can help you clearly understand what your project requires. With this understanding, your project will get done right on time and within budget.

Excavating involves getting the job site ready for construction. Excavating is typically done by digging and removing debris from the site where the actual construction will take place. During the process of excavation, excess soil and rocks are removed from the construction site. This process can be extremely intensive. It may require large equipment as well as expertise in excavation techniques.

The excavation process may vary from project to project depending on the specifications of the job site. For instance, the contractor may have to dig several holes for concrete pouring around the foundations. In job sites where there are stumps and boulders, excavation may involve getting rid of them completely. Once the debris has been gathered, it’s hauled away from the construction site.

Most people don’t understand why excavating is so crucial in the landscaping design and construction process. To start with, the excavation technique varies from one project to another. In most cases when working on a project in Guelph, the excavation is done using heavy-duty mechanical earth cutting equipment such as bulldozers, excavators, loaders, and dump trucks. It’s important to keep in mind that deep excavation can only be achieved by using these tools and would be near impossible to achieve by hand.

Excavation can be classified depending on the material that is being excavated. 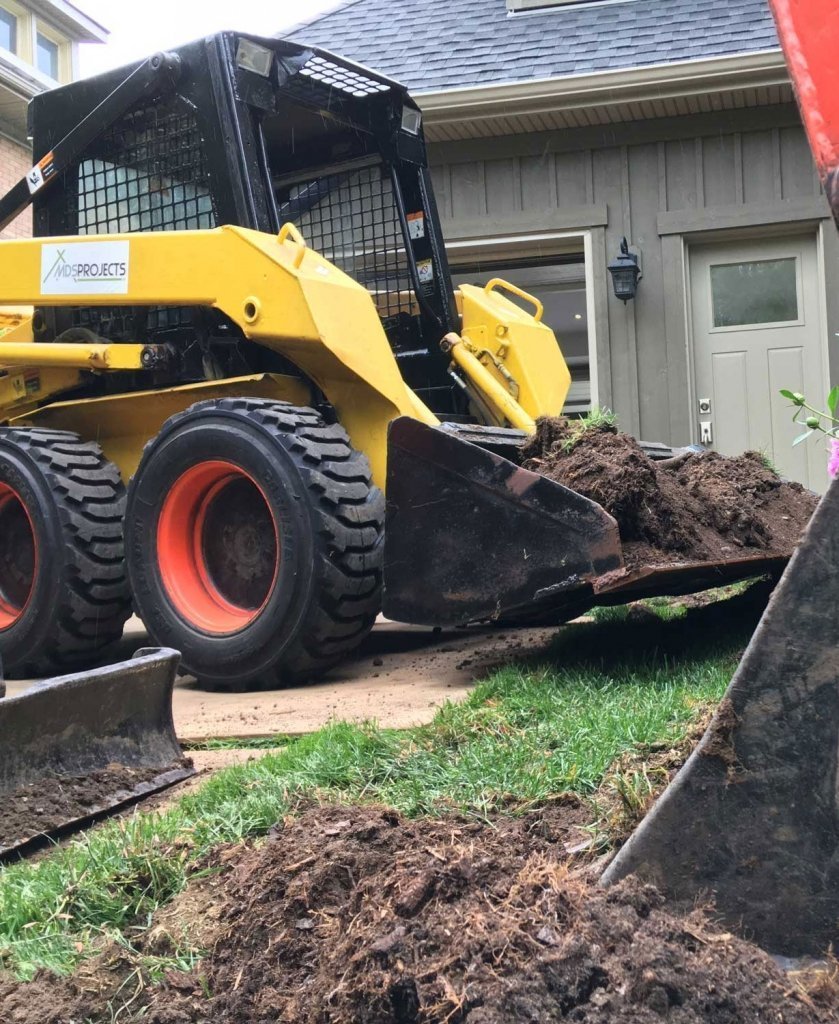 Grading, which is also known as land leveling, is done after the job site has been excavated. This process involves cutting dirt from higher spots and filling it in the lower spots in order to create a smooth landscape that doesn’t vary in terms of elevation. Grading is what provides a base for laying out the foundation. Sometimes our Guelph grading contractors will recommend this process in order to slope the land away from the construction site and ensure there’s proper drainage.

The benefits of proper grading

To start with, grading can help prevent poor drainage problems in construction projects. If a structure is built on uneven ground, the result is poor water drainage. What could happen is, instead of the water draining away from the building it could start flowing toward it. In periods of heavy rainfall, it’s easy for water to accumulate on the building’s foundation and cause significant structural issues. What could follow is damage to the landscape vegetation, cinder blocks and interior flooding that could result in significant losses.

Additionally, grading is done to reduce holes and bumps on the ground during construction. If the area is to be used for post-construction landscaping, grading ensures that you have a flat surface to work with. Due to these reasons, precise grading must be done as part of any construction project. Grading not only provides you with a solid base to begin working with but also prevents poor water drainage that could damage the entire building.

How are grading and excavating different? 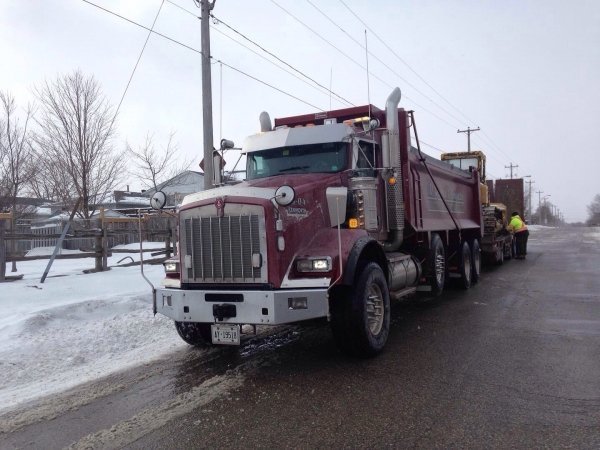 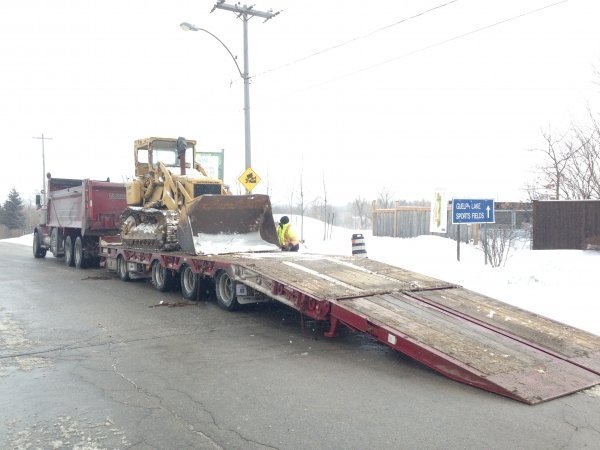 On the other hand, grading is done during the last stages of construction. The main purpose of this process is to create a smooth and level surface which makes the site ready for landscaping. Grading can also be done mainly for aesthetic reasons. It makes the site look more pleasing. The machinery used for grading includes a blade, bobcat or tractor that has a landscape rake attached to it. 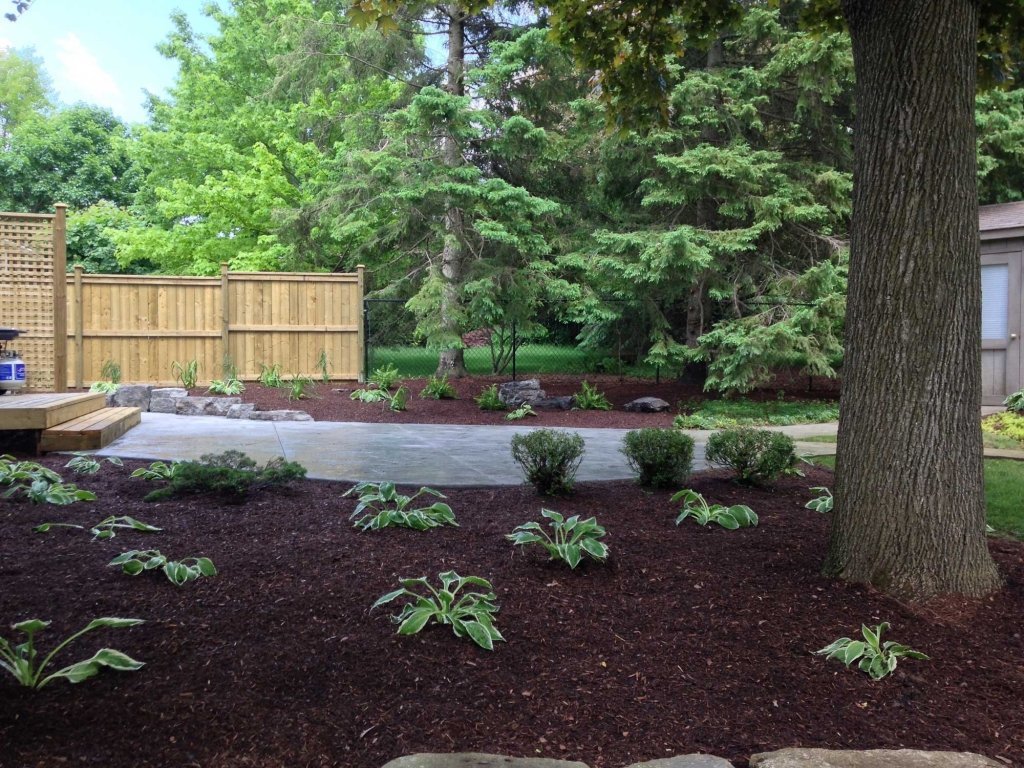 Both grading and excavation are very important processes in the construction process. They involve a lot more work than removing dirt and leveling surfaces. It’s really important to identify a contractor who has experience and skill in both techniques. Additionally, a good contractor should have the tools required to get the job done. By working with an experienced contractor, you’re assured access to a fleet of machinery, which can take care of this project.

When you partner with M.D.S. Projects Ltd., you can be assured of a Guelph excavation and grading contractor who is reliable and can perform high-quality work within the given timelines. We also offer additional services such as hauling the debris away once the project is completed leaving your property as clean and neat as we found it.